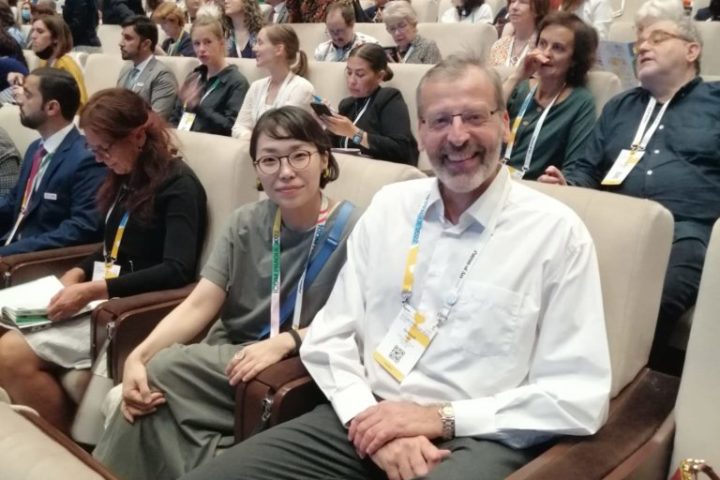 Dear Members and Friends of ICFA,

A new Board was elected during the ICFA Members’ Meeting in Prague in August of this year. I completed my second term Chair and am overjoyed to announce that Kanae Aoki was appointed the new Chair of ICFA.

This change means transformation and continuity at the same time. My second and last term as Chair began in 2019 during the Kyoto ICOM General Conference with the participation of many Asian members. They were very present during the ICFA sessions: a pleasing consequence of ICFA’s ambition to attract more members worldwide, instead of insisting on defining Fine Arts only from a European point of view. Kyoto began our efforts think world-wide. How can we discuss Fine Arts amongst and with all continents? Can we display Fine Arts under one roof? Is there a unifying aesthetic?  North American museums have already taken big steps in this direction, particularly in presenting Fine Arts for diverse audiences, considering different premises and approaches that concern visitors, artworks, and their respective contextualizations.

The plan to explore these practices and to learn more about the practice of “World Fine Arts” presentation ended with the restrictions of the COVID-19 pandemic, when travel and meetings became dangerous and banned. ICFA had planned to meet in 2020 at the prestigious Virginia Museum of Fine Arts in Richmond, USA, but was forced to postpone and later cancel our global convening. We hope to resume this idea in another way over the next few years.

Our other goal — making ICFA more intercontinentally connected and more interesting for ICOM’s worldwide members beyond Europe and North America — has been more effective. A significantly higher interest in our work has been proven by the fact that members from East Asia are actively taking part in our sessions. With the nomination of our new board member Benjamin Ouedraogo from Burkina Faso, the continent of Africa has finally acquired a voice within ICFA’s activities. What is more, ICFA now has the opportunity to learn about the conditions and necessities of display for African Fine Arts.  This small, first step demonstrates the intention of ICFA’s continued efforts in becoming effective world-wide!

Dear ICFA Colleagues around the world,

I am pleased to greet you as the newly-elected Chair of ICFA. As a self-introduction, let me start with a story about ICFA and myself.

I began my involvement in this group at the ICOM Milan Meeting in 2016, as a liaison for the next Kyoto meeting that was to occur in 2019. Throughout the three years of preparation, I was able to join many different discussions. I also had several questions about the Committee, and the Board tried to solve them sincerely. My most significant concern was the amendment of ICFA’s definition, which at the time limited ICFA’s chronological range from “Antiquity to 1900.” After discussing the reasons for this periodization, and by proceeding with care and respect for the statutes, we were able to modify the definition, simplifying it just as “Fine Arts,” with no conditions for chronological periods or geographic restrictions.

I believe this “opening up” symbolized an historic change for ICFA after almost 40 years. And it came at the right time, namely when Christoph Lind, the previous Chair, was eager to think about reorganizing the Fine Arts all over the world “under one roof.” I totally agreed with his vision and raised my hand in Kyoto to be the first Asian Board member of ICFA. It was a wonderful experience for me to talk about the future of Fine Arts with the Board, even though our dream to discuss it in person at the Virginia Museum of Fine Arts in Richmond (VMFA) unfortunately could not be realized.

The pandemic ceased many activities we had planned, not only by preventing our physical movements, but also by increasing our general tasks at home. As all our activities consist of members’ voluntary work, it was sometimes not easy to keep working as before. One thing we positively gained through the pandemic is the opportunity to meet virtually. It allowed me to meet more frequently with other Board members in Europe. This fact pushed me to think about the possibility of serving as Chair even from far away “alone.” Then, in Prague, we succeeded in having a hybrid meeting – and even our election.

From its founding at ICOM’s 12th General Conference in 1980, ICFA has made great strides in the scientific research on art history and museology in European Fine Arts. However, in this 21st century, we have the responsibility to think globally and stimulate discussion from different vantage points. Succeeding former Chair Christoph Lind, my leadership as the first non-European member embodies continuity within the process of change. I believe that Christoph’s earnest and sincere vision of the world’s “Fine Arts Under One Roof” can only be realized by setting up “solid pillars” in the field of museums and collections to support the roof. More importantly, these pillars should be built up by members of ICFA, and not by Board members.

I will soon announce the specific ideas of those pillars for which each one of you can bring to bear your own interest and share your daily work. Now that we have measures to meet virtually, there is no obstacle for us to start afresh with various group activities. With all these small steps, we will be able to see the future shape of Fine Arts. I want as many members as possible to join in this process.